The Ottovale coke works were built by Priestman’s on the site of the old Dockendale Hall.

Dockendale Hall and farm were part of the estate of the Silvertop family who came to Tyneside during the Commonwealth and settled at Dockendale. William Silvertop was involved in the coal trade and became agent for the Winlaton estate in 1669 through his friendship with Albert Hodgson one of the Lords of the Manor of Winlaton. There was a sale of furniture at the Blacksmith's Arms, Winlaton in 1760.  A lady who lived in Dockendale Hall (at Blaydon Burn, not the hall of the same name at Whickham) bought a large, old bureau for 4/6d (22½p).  She got one of her neighbours – a nailer – to help her take it home.  As they were doing so, some loose gold fell out, which the woman and her friend quickly concealed.  When they got the bureau home they discovered a considerable quantity of gold.  She gave the man enough money to buy a house and workshop (about £200).  It was known that the bureau had passed through various owners and had been in the possession of a wealthy family in Newcastle in 1715.  None of the gold was dated later than the reign of James II (1685–1688).  In 1765 the premises were occupied by a John Humble and Thomas Billy and from 1797 was rented by William Matthias Dunn who altered it into tenements for his keelmen. By 1840 Dockendale Hall was empty and it was in ruins by the time of the OS 1st edition (1856), noted as ‘old walls’ and the remains were destroyed when the electricity sub station was built in 1904.

The importance of the Ottovale Coke Works which were built in 1902 must not be underestimated. Comprising 80 ovens and made by the German Co of Otto Hilgenstock and thus known to everyone in the area as “The German Ovens”   the area became known as Ottovale. To make use of the waste heat from the coke works an electricity plant was established in 1904 at Ottovale, known as Blaydon Power Station and fully commissioned by 1906 it supplied power to the colliery and was later connected to the North East Electricity Supply Company network remaining open until 1959. The gases contained other useful products and in 1911 these were the first works in the world to produce petrol from coal – originally known as Blaydon Benzol and later National Benzol.The raw product was low in strength and was re-distilled before being delivered to the refining plant. The refinery also extracted toluol, ammonium sulphate and naptha.

It was operated by Newcastle Benzol Co. a subsidiary of Priestmans.The tar went to Thomas Ness Ltd. And the ammonia was sold as fertilizer. Ness built round enclosures in soil to pour in the molten tar which would cool rapidly and be broken up for use. The toluol ( Toluene) was an important ingredient in TNT. Benzol however was the main product, the refinery being eventually sold to the National Benzol Co.. Blaydon Power station was the first waste-heat station to be used for other than local supply (1905), the first of a pair of distant power stations to work in parallel, the first to use regenerative feed heating (1906) and the first to use a totally enclosed air ventilation on the alternator (1919). The water supply was taken from a reservoir and a dam ( Hobby’s Dam) in the Blaydon Burn with additional supplies from the Gateshead Water Co. and the River Tyne. The works initially supplied power to Blaydon Burn Colliery before being connected to the NEESCO ( North Eastern Electricity Supply Co. ) network. 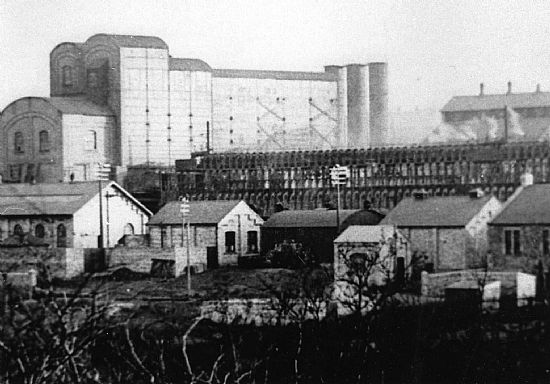 There was a terrace of seven houses with gardens, Otto terrace, to house workers at the plant.
Also it was thought that the fumes from the coke ovens were good for the chest …   you know that smell of tar ??..... and children with bronchial problems were taken for a walk around the ovens and told to breathe in deeply and the fumes would clear their lungs.

Many thanks to Dr. Tom Yellowly for information about Ottovale