The mill near the mouth of the Blaydon Burn known variously as RENNISON’S/Haggerstone’s/Pickering’s Mill is noted on the 1632 map and a rental advertisement of 1760 advises us “ ‘To Let’  a well accustomed water corn mill” with 2 x 2 roomed houses with milk house & tenants also warehouses and lofts. Rental £26 per year with a water wheel 12’8” in diameter. There was also a single track waggon way between the mill site and Massey’s forge. By 1838 Joseph Cowen had opened his 2d brickworks on this site and gradually the brickworks covered the whole area so there is now no trace of either the mill or the keelmen’s cottages.

Opened 1838 – on site of Rennison’s Mill it had 11 kilns and a good hand moulder could make 2400 bricks per day, by 1926 they had changed to machine which could make 1200 bricks per hour.They made 6 million bricks per year. Fire clay lies beneath coal in layers between 12” and 5’ or 6’. Chiefly composed of silica and aluminium with an absence of lime or iron. The trade in Northumberland and Durham was considerable –

In the nineteenth century the cost was 55/- (£2.75) per thousand. Weathering separates the impure portions from the good clay and enables them to be seen and picked out with ease. To the clay was added sawdust, pulverised wood, charcoal and carbon.

The brickworks usually employed about 80 workers and although export orders had dried up by 1955 they continued making common red house bricks until 1967. The yards finally closed in 1975 when the remaining stock was sold off at £15 per thousand. All brickworks stamped their individual mark on their products and the Cowen marks were: 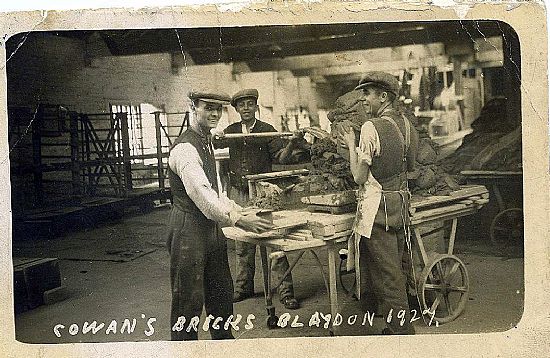 Not long before Joseph Cowen died in 1900 the business came into owner ship of Priestman’s Collieries but they continued using the Cowen make because it was so well known and had a good reputation. When the coal industry was nationalised in 1947 the bricks made on this site were stamped NCB MITFORD.

So,  this could be a new hobby – looking for brick marks – all the local brickworks stamped their own name on their bricks and Cowen bricks have been spotted in many parts of the world including Palestine and Jamaica.