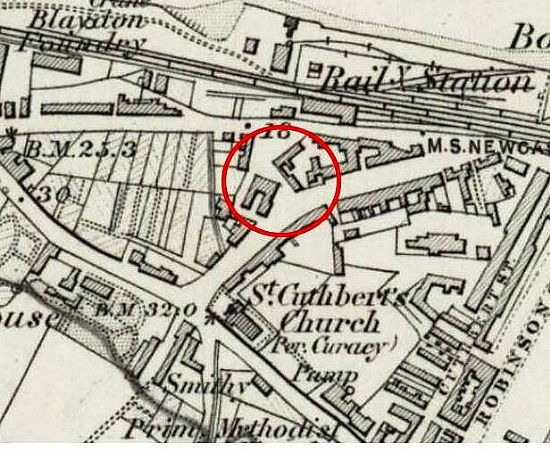 In 1775 the village of Blaydon comprised of a number of houses bordering the Hexham turnpike with a windmill near where the railway crossing is now. The wharfs and staithes  at Stella and Blaydon were an important centre of the lead trade with the refinery based at Blaydon.We can identify the old agent’s house of ‘Blaydon Staithes’ as being one of what look from the earlier estate maps to have been some large houses facing each other in a small square on the left just where Church St bent slightly to the right. They were owned by the Beaumonts, and one was occupied by Thomas Emerson, the deputy agent in the 1830s or around that time.

The building in the centre of what became known as Wesley Square was the old agents house probably built for one of the Robinsons in the 1670s after Blackett bought his half share of the Winlaton lordship. By 1690 it was occupied by Michael Robinson and it was where the witness depositions were taken in the court case between William Blackett and Thomas Tempest regarding the lead road at Path Head. It seems to have been not unlike the houses built for agents at Dukesfield, Allenheads and Fallowfield, all of which survive and are reasonably similar in pattern.

Thomas Emerson was John Mulcaster's under-agent (and nephew we believe) and it seems he moved into the old house once Mulcaster went the much larger and grander Blaydon House ( see notes on  Blaydon House ) which was built c1820 . His name is shown against it in one of the early 1850s maps ( Lot 5), possibly not long before Cowen took it on to use it as the first reading room in Blaydon; with Joseph Cowen jnr. being the first subscriber; to be superseded by the  Mechanics Hall  built in Tyne Street in 1853. Thereafter the old building was used by Bewick’s Mineral Water Factory and they are recorded in a  Blaydon business list of 1894.

In 1828 Blaydon was still a village but with the coming of the railway and new industries by 1850 it was a thriving industrial centre and with the re-opening Blaydon Main Colliery housing was built for the miners and other workers and the town centre began to develop, Wesley Square and new shops surrounded the old building.  Edward Fields, born 1869 in Lincolnshire as a young man moved to Hartlepool, then Chester le Street, before again moving to 121 Thomas Terrace in Blaydon he is recorded as a Mineral Water Manufacturer in the 1911 census and also owned an "off Licence and Confectionary shop" in Blaydon Square in the same time period - this I believe was at the far corner from where the buses used to drive in (opposite corner from the Red Lion).However, the "Pop" factory or the sugar stores caught fire and it burned down and that was the end of that business. It would seem that this sugar store was not part of Emerson house, but perhaps another building in the vicinity of Wesley Place. Perhaps it is one of those things never to be uncovered.

Thereafter, he started a haulage company with draught horses and wagon - hauling whatever and later became a co-owner in a small "Omnibus" company that ran from Newcastle Central to Haltwhistle, Corbridge, Greenside, and such places.Apparently this went bankrupt and he died - probably of the stress to his heart in 1929. These buses were most probably First World War Army lorries that were surplus at the end of the conflict and that were purchased by English companies from the Army and used for commercial purposes, many
being converted into small single deck buses. His bus company may have been called "Gray" or "Grays", "Fields" or even as a long shot, "Primrose".

By the 1920’s the old white washed building was impeding traffic in the busy town centre of Blaydon. A newspaper article advised that Blaydon Council wanted to buy the building and demolish it should the owner be willing to sell as it jutted out into one of the main thoroughfares making the road so narrow ( about 20’) at that point that it was very awkward and highly dangerous there being much traffic. The was most certainly achieved as the building appears on the 1919 OS map but not on the 1932 OS map of Blaydon. An early indication of the future of Blaydon Town. 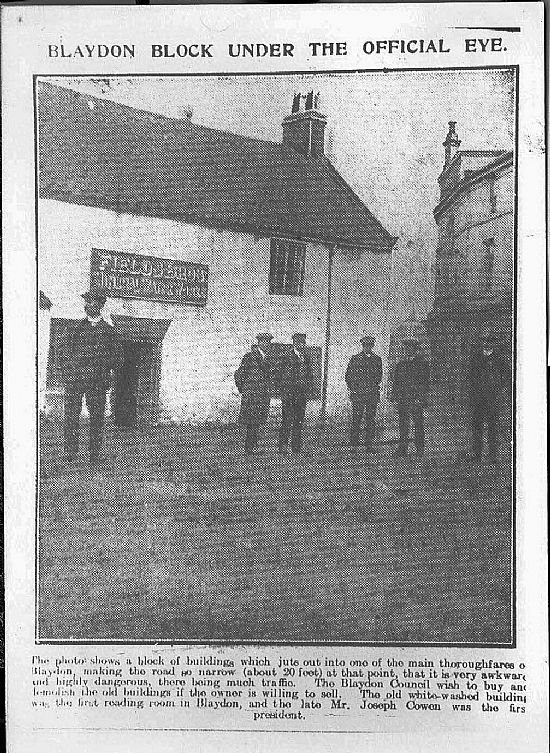 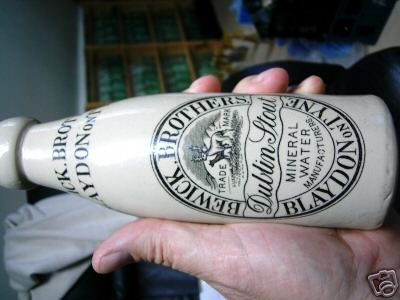