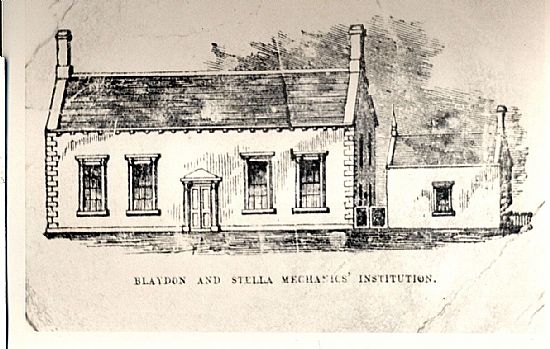 A mechanic – a craftsman, an artisan

The concept of a Mechanics Institute was revolutionary in its day. The very first organisation to provide education for adults from the working classes. The Precursor of public libraries with the aim of being vehicles for economic, social & political emancipation. Founded by George Birbeck (1776-1841) in Scotland as an open, free course of lectures on the mechanical arts.1st mechanics institute 1821 Edinburgh.

The Gateshead Mechanics institute opened in 1836 and Joseph Cowen jnr. inspired by articles in the Peoples Journal founded a literary and mechanics institute early in 1847. ‘The aim was popular education accessible to women and men, social and political as well as technical and scientific and rooted in a democratic philosophy. The traditional role of mechanics institutes as tools of factory and millowners, intended to instruct male workers in a limited range of skills was overthrown at Winlaton and Blaydon. From the start Cowen argued that women, who had supported the foundation of the Winlaton Institute should be admitted to all rights of membership. Cowen stipulated that every male and female be they ever so poor should have a sound and radical education’. (Todd). He started Blaydon Mechanics Institute at the reading room in Wesley Square,followed by a purpose built hall in Tyne Street funded by the Cowens and by public subscription at a cost of £600.00 which had opened by 1853. The building had a library with 2200 volumes, reading room supplied liberally with newspapers and magazines and a lecture hall which was largely furnished by Joseph Cowen with paintings and artifacts, including a piano  from Stella Hall. Joseph Cowen jnr.regularly taught at the hall  which for many years was the centre of Blaydon’s social, educational and political life,he promoted discussions and talks at the mechanics hall, invited well known political  speakers and the hall is famously mentioned in the song ‘Blaydon Races’ when Geordie Ridley advertises his own concert to take place on the evening after the races. 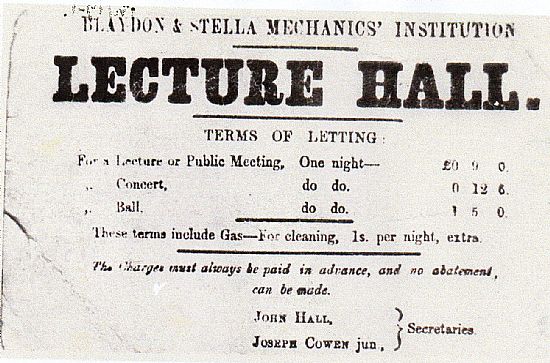 Eventually once there were free public libraries and the institute failed to attract younger members there was no need for the institute which closed in 1877 and the building having had the frontage altered became the Co-op pork butchers shop.  Finally the building was demolished in the 1970’s as part of the re-development of Blaydon that saw the end of the old Blaydon town centre and the rise of the new shopping precinct, the stone lintel however is preserved at Blaydon Library. 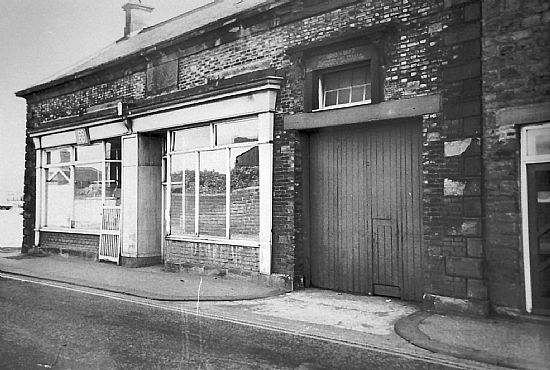