Durham diocese one of the wealthiest in the country.  New parishes were created, and St Paul's was one of the first.  Built 1828, it was at first a chapel of ease to Ryton, but a separate parish (carved out of Ryton) was created in 1832.  In 1828 the village had a population of 4,000 and 11 inns & taverns.

Reasons why built and parish created: General concern about lack of adequate church provision in the growing industrial towns (The Church Building Commission was set up in 1818 to build more churches.  NB: St Paul's itself is NOT a "Commissioners' Church".) Belated replacement for Crowley's chapel.

When Crowley's closed in 1816 (due to very big drop in government orders after the end of the Napoleonic wars), the majority of the local population lost their livelihood, and lost Crowley's social care.  They were becoming politically minded.  Crowley's chapel had fallen into decay.  The apparent lack of interest on the part of the C of E led people to turn to the "new" denominations (non-conformists, Methodists).  The rector of Ryton (Archdeacon Thorp), together with local landowners, decided that the C of E must take a more prominent role in village life.  (Thorp gave up part of his income from Ryton to provide the endowment for St Paul's rector.  The site chosen was the bull ring, where bull baiting had been carried on (last baiting 1827).  Church built 1828.  Designed by Ignatius Bonomi (1787–1870) of Durham.  Seats for 800.  Cost £2,500.The original rectory was paid for by the first rector Wardell  although it was later demolished and replaced by present ‘old’ rectory 1910.

Shields on tower (facing war memorial): the two bishops of Durham under whom the church was set up: (left, with chevrons) Shute Barrington (d. 1826), (right, with crossed scythe-blades) William van Mildert (bishop 1826–1836). (Van Mildert stayed the night with the Claverings at Axwell Park before consecrating the church.)  Shield on south side of tower, over door : Archdeacon Thorp.
Picture on nave west wall, over entrance, presented by Charles Clavering – copy of an old master.

East window by William Wailes, 1847 – cost £145.  Small window in west wall of tower donated by Wailes 1855.  All C19 windows look to be Wailes windows.  The modern window on the north wall of the nave is two separate commissions carried out by Sep Waugh of York.

Chancel screen donated 1898 by Clavering family of Axwell  Park, in memory of a daughter of Sir Henry Augustus Clavering.

Church Hall and School (West   Lane) Church Hall was originally the Church  School.  It was built in 1901 (as a school), and opened in 1902, to replace the National  School.  Cost £2100; opened by Francis Priestman,owner of Blaydon Colliery.  Money raised by donations, including £350 from Priestman's Collieries, £165 from the Cowen family and £10 from the rector (Walter Brain).

Church hall built at back of school, 1921, with donations from the  Priestman, the Cowen's and the Bagnall's.  Last used during WW II, to house troops.  It was then demolished as being in too poor a condition to repair.School closed approx. 1956 – falling numbers.  Then used as annexe to the Board  School in West Lane, and still called the Annexe by older residents. Became Church hall 1967 (PCC paid £1500 to Education Authority). This building was badly damaged by fire 2015 and restored 2017. 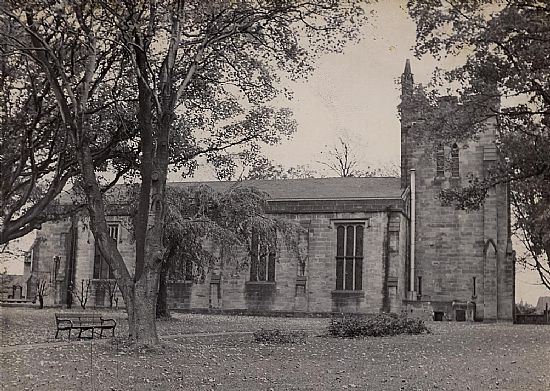