It has been recorded that Wesleyan Methodist adherents in the village first used as a place of worship the long room of the ‘Oak Tree’ public house. Rev. Hodgson Casson, at one time stationed in Gateshead circuit, frequently visited Winlaton and preached in the ‘Oak Tree’, When voting at a  Parliamentary election for the Westmoreland County, Casson after giving his name and address to the polling clerk was asked his occupation, when he replied “ A fisher of men” “What”, said the clerk. It was treated as a joke he was playing at the expense of the clergy. Then he was entreated to give a proper description of his calling. But nothing further could be got from him but “I am a fisher of men”. The attention of the popular candidate being called to this singular voter, he interrogated Casson, but to henry Brougham the answer was the same as to the polling clerk. So, Brougham ordered it to be inserted and in the poll books it stands to this day:- “ Hodgson Casson, fisher of men”. No minister ( it has been said) better deserved the description. The result of Cassons’ preaching in the long room became the scene of much Christian activity, which eventually led to the opening of a chapel in Front Street. This in turn was replaced by a new larger chapel in Litchfield Lane , Winlaton which  opened  for public worship on February 27th. 1868.

It was truly a sad day for the villagers, more especially to the Methodists, Sunday, February 26th. 1895 when they realised that their church was on fire. It was about 7.30 in the morning, a man named Thorburn observed smoke issuing from the roof of the building. The caretaker, Robert Elliott, was called, and after getting the keys top open the door of the chapel, found that the organ and choir seats at the north end of the building were on fire. Ina short time the chapel was a mass of surging flame end to end. Fire brigades from Blaydon and Newcastle had the fire under control by half past nine. To augment their water supply, the firemen laid their hoses on the nearby wells. There was nothing left standing except the caretakers house and the four walls of the chapel.

Fortunately the congregation were able to use as a place of worship, the long room in Front Street situated near the Vulcan Inn. This upstairs room at the time was being used as a Sunday School and for social functions. It was about the beginning of 1896 when they returned to their chapel. At this period Methodism was certainly becoming a living force in the village. The activities of the church and Sunday school were becoming severely hampered by the lack of accommodation; the membership was also increasing. The congregation, having amongst them an active body of workers, decided to remedy this drawback by enlarging the building northwards to the extent of eighteen feet, A start was made on August 25th. 1924 with the laying of twenty-nine foundation stones by the individual members of the church, representatives of the Wesley Guild, Sunday School and friends. The proceedings were presided over by the Rev. J.O. Warburton sup. Minister, supported by Rev.D.Ledger Pawson. A new building was erected for the use of the Sunday School, Wesley Guild and for social functions. The pproximate cost was estimated at £4000.00. Thomas Pentland, a member of the church for many years, by his will, bequeathed to the trustees of the church two cottages situate in Tyne Street. These were eventually sold, the proceeds of which went towards the cost of the extensions.

The church as we know it today, commands a very imposing site at the entrance to the village which is now more than a village.The interior is lofty and well lighted and much enhanced by the fine pulpit rostrum and choir seats, all of light oak, given to the church by Joseph Thornton Tweddle in memory of his beloved parents., Thomas and Mary Tweddle on 14th. September,1936. Another improvement which certainly adds to its beauty is the oak panelling around the walls of the building. This was undertaken by the congregation as a mark of esteem for Thomas Ford. Mr. Ford,who was for many years, and up to the time of his death, in 1937, manager of Blaydon Burn Colliery, held the office of secretary, and acted as organist from 1906 to 1937.

The building contains three brass tablets:- 1. In memory of Thomas Ford, whose gracious influence, saintly character and devoted services both in the church and village endeared him to all.  2. In memory of Thomas pentland, a faithful member of the church and in recognition of his generous gift towards its extension.3. In grateful memory of the young men of this church who fell in the Great War 1914-1918:-

Another form of activity in the church was the establishment of a brass band which functioned for many years. The Methodist New Connexion had a place of worship in the village. It was known as Zion Chapel. William Booth who later became ‘General’ Booth whilst stationed at Gateshead preached at the chapel. The society was functioning in 1859 for they held their annual conversazione on New Year’s Day. The programme consisted of anthems given by the choir under their conductor, William Parker, and violin solos by a young musician named Burdon. Mention of the name of William Booth reminds me that he visited Blaydon in July 1906.he was met by Coun. John Raine, chairman of the Blaydon Council, at the Newcastle Central station, who drove him in his car to Blaydon. At the crossing a large crowd were waiting to greet him. He was entertained to lunch by the Rector Rev. R. Napier Clavering. Later, he addressed a large company in the Co-operative Hall  upon the rise and progress of the Salvation Army.

In 1923 Mr. Tweddle a local farmer and butcher from Loup farm, Blaydon donatedmoney to the chapel for a new pulpit and to alter the door and provide steps to the new doorway.In the picture L-R : Rev.Ledger Pawson, Mr.Reay, Mr.Emmerson,  Mr.Tweddle,Rutter Carr, The Minister,  Tom Ford,  Mr.Ridpath(Colliery Manager) R.E.Ford .Thomas Ford was Manager at the Bessie Pit 1914-1930 and the Mary Pit 1930-1940.R.E.Ford was the father of Lillian Ford who taught French at Blaydon Grammar School for many years.

When the Wesleyan Methodist Church closed they joined forces with the United Reform Church until their joint closure in July 2015. The hall was demolished and the chapel building converted to private dwellings. 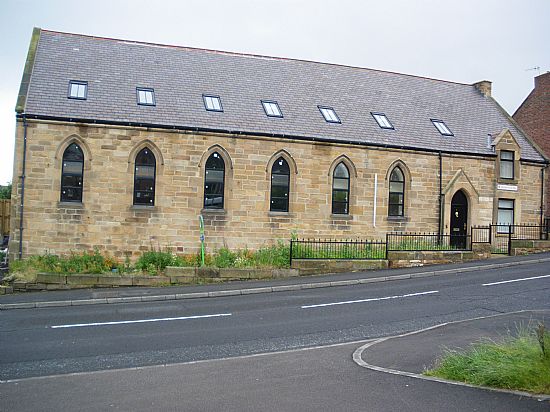 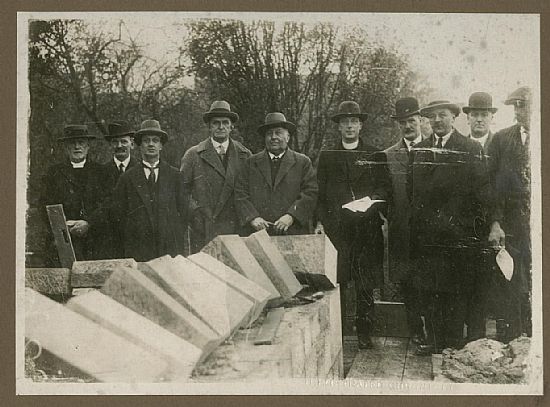