Four hundred years ago there stood in Winlaton a small Catholic Chapel dedicated to St. Anne, which was destroyed after the failure of the rebellion headed by the Duke of Westmorland in 1569. The Earl sold the manor of Winlaton for £3000 to a group of Newcastle merchants in order to finance what was then called the Rebellion of the Earls, aiming to overthrow Queen Elizabeth I, a scheme which ended in disaster for most of those who took part. There is really no documentary evidence to support this tradition, only the statement made by Jonathan Storey in 1705, that the chapel, built by the Crowley workmen was erected upon the ruins of the old chapel which had been burnt down in 1569, in retribution for the rebellion. The foundation and reason for the old chapel standing here is unknown, but the problem leaves plenty of scope for conjecture. The County Durham historian William Hutchinson writing in 1787, states “whenever the ground near to the chapel is broken to any depth, large quantities of human bones are frequently dug up”. This may point to the fact that there was a burial ground connected with the chapel.

The chapel stood on Front Street, where the road forks; the apartment block named Thornbury covering the exact place today. In 1890, excavations were made on the site by Mr. T.C.Nicholson, an architect of Blaydon whose chief local works were the old Winlaton Board Schools and Blaydon East School that used to stand at the bottom of Shibdon Bank. Nothing of note was found during these excavations, a fact hardly surprising, considering the large amount of activity which has taken place upon the grounds surrounding the chapel after its destruction.

When Ambrose Crowley came north to set up his factory in 1691, Winlaton village, consisting of a few houses occupied by miners and farmers, stood in the old Parish of Ryton. Any person wishing to receive the rites of the Church, marriage, baptism and burial, and also to perform their ordinary devotions, had to tread, what was for some a long weary road. As can be imagined the congregation at Ryton Church would not have among its number many people from the outlying districts.

A young man from Newcastle, Jonathan Storey, aged seventeen, was apprenticed to Crowley in 1697. Promotion in Crowley’s firm was rapid and by 1702 aged only 22years he had become manager of the Winlaton factory. He was very concerned with the spiritual welfare of the village, and with Crowley’s backing, he approached  Nathanial Crewe, Bishop of Durham, for permission to build a place of worship. The reasons given were that Winlaton with a population of about 2000 was suffering “ the hearty attempts of the Emissaries of Rome, and the sinister practices of the no less dangerous Factors of Geneva, to turn them away from the established church”.

Apparently, for some time the Catholics had set up a ‘mass house’ in the village, which Storey viewed with an uneasy eye. Things came to a head on New Year’s Eve 1704-05 when the Dissenting Teachers came and set up a ‘conventicle’ at the other end of town. On New Year’s morning, Storey rang the factory bell and called the villagers to a meeting at the Sandhill. In a fire and brimstone speech he told people of the dangers, in his view, of being seduced from the established church. They also had to beware  the ‘strolling preacher’ to whom he apportioned some of the blame for Civil War fifty years earlier. The speech being ended, the whole assembly firmly resolved to adhere to the Church. It could hardly have been any other way in firm like Crowley’s; the managers views would be practically a command; the men told Storey they were willing to have the benefit of the preaching of the church but they did not have a consecrated place of worship in the village, nor a minister. The Bishop on hearing this sent his blessing for the good work and urged the clergy to help. The hall, belonging to Sir William Blackett was licensed as a place of worship and visiting clergy held services there.

The Revd. Dr. Tomlinson, Rector of Whickham was greatly interested in the work and on 5th. February came to Winlaton to preach, bringing with him several Magistrates from Newcastle. He did not preach very well, as he was suffering from ill health and had difficulty entering the pulpit. After the service several clergy offered their services free of charge, every Lord’s day until the factory provided a chaplain. It was decided by the workmen that one half farthing in the shilling would be deducted from their wages to pay for a chaplain with Crowley adding another £10 from the firm. The chaplain’s wage was to be £50 per annum, to be paid weekly. The whole sum collected was enough to pay the wage bill and to give £20 per annum to endow a school.

The minister’s wage settled, next came the building of a chapel. Jonathan Storey launched an appeal for funds and was quite astonished at the response. Contributions flowed in, some giving 10 or 15 shillings ( 50p & 75p) and up to £1 each. Which soon built up a considerable sum. At the same time they appointed Mr. Edmund Lodge from Haydon Bridge as a temporary chaplain. Jonathan Storey was invited to lay the foundation stone which he dutifully did on 5th. April, 1705. The building progressed so quickly that by 23d. August it was fit to be preached in. As usual this was celebrated by Crowley’s crew with a huge party. It was a memorable night in Winlaton with bonfires burning in many parts of the village and the factory bells echoing across the countryside, the evening concluded with a feast. The chapel was finished in January 1706, laid out with pews, a gallery at the west end and a turret in which was placed a clock. Both the turret and the east end of the chapel were decorated with fancy iron work. This is a blacksmiths village after all. It was said the clock was ‘of good use to the town and also to all of the adjacent villages’. From this statement, can it be presumed that this was a chiming clock? There was seating for 300 persons and these loyal subjects of Queen Anne had decorated the interior with the Royal Coat of Arms and other ornaments, with texts from the Commandments upon the walls. Everything needed for the service of the church was complete, including surplices etc. daily service was performed there, but communion was not allowed, nor services on Christmas or Easter day, when the congregation had to travel to Ryton Church and where a gallery was reserved for the use of the Crowley workmen and their families. This chapel like the first, was also dedicated to St. Anne.

After the opening, Crowley appointed his own chaplains, his first appointment being a Mr. James Meir. A hundred years later the last appointment was given to the Rev. John Chambers who was well known in the district as a crack shot. The chaplain’s duties were many and varied. He was instructed to read prayers, as directed by the Church of England, established by law, every Sunday in the morning and afternoon. He had to sit on some of the committees and to champion the cause of the oppressed. In addition, he had to visit the sick and ‘rebuke vice and promote virtue’. One passage of his instructions make us curious; ‘itt is thought reasonable that the Chaplain do forebear frequenting ale houses, or att least not to make any considerable stay there’.

In 1815, when Winlaton was abandoned by the Crowleys the chapel fell into decay and was demolished. It may not have been used regularly during the last few years of the Crowley regime, the last known service taking place on 10th. September 1809, when the Rev. Charles Thorpe, Rector of Ryton preached a charity sermon on behalf of the Sunday Schools. In 1816, a large schoolroom was built on this same site, by subscription aided by gifts from the National and the Diocesan School Societies and from Lord Crewe’s Trustees. This school remained until about 1898, when the ground was prepared for yet another chapel – that of the Congregational Church.

The successor to the original Catholic Chapel, built in 1962, is dedicated to St. Anne. 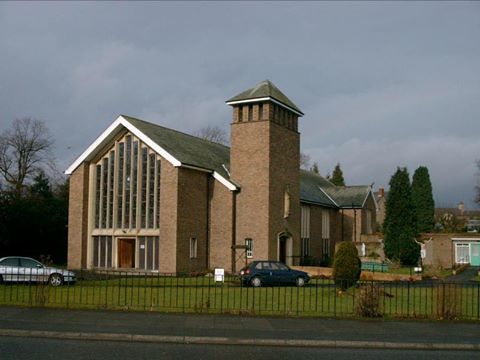