Until 1898 all Roman Catholic baptisms, marriages and funerals were held at the Stella Church of St. Mary and St. Thomas Aquinas which had opened in 1831. On Sunday 31 July 1898 the old school ( now the church hall ) became the mission of St. Joseph’s  and opened for divine service, although the first marriage didn’t take place until 1899.

As Blaydon continued to develop and expand the population boomed and there became a need for a much larger church in Blaydon. Father Wrennell had been appointed to SS Mary & Thomas Aquinas in 1865 which at that time was the only RC church between Gateshead and Hexham, by 1870/1 he had built and opened the school in Blaydon. The foundation stone for the new St. Joseph’s Church was laid on 30 September 1903, the architect was Charles Walker of Newcastle and the cost estimated at £8500.00 with seating for 800 worshippers, originally intended to have a spire this was never built,probably due to cost.The church was built in sandstone quarried just ½ a mile
away up Blaydon Bank

Mrs. Leadbitter of Elvaston Hall, Ryton bequeathed £6000.00 towards the church and the Townely Trustees were willing to sell the land and the foundation ceremony was attended by hundreds of townspeople along with clergy, choir, the Stella Military Brass Band, St. Joseph’s Guild and St.Joseph’s League of the Cross. Until the Presbytery was complete Father Corboy took lodgings in nearby Garden Terrace. The church was inaugurated on Thursday 8 June 1905 with a High Mass celebrated at 11.00 am. In 1920 Father Pippet installed the present High Altar as a War Memorial to the fallen of the 1914-18 war and the reredos was installed and painted at the same time by the artist Gabrielle Pippett the brother of Fr. Pippet. The Crucifix was donated by The League of the Cross. The church was finally consecrated on Monday 2 June 1930 and the Bishop of Hexham & Newcastle , Dr. Thorman conducted the ceremony of dedicating the church commenting that the parishioners had worked had with their Rector Fr. Pippet to wipe off all the debt on the handsome edifice. 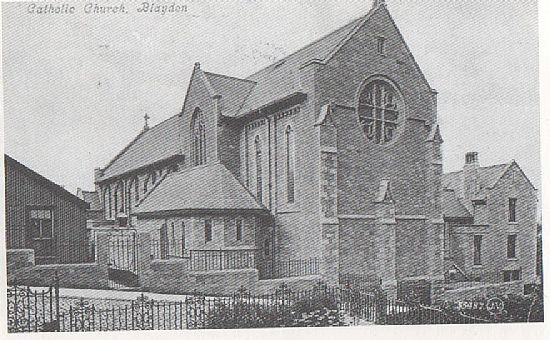