The Methodists had a preaching house in Blaydon from the early nineteenth century, a Gateshead Wesleyan Methodist Circuit plan for 1829 indicates that at that time there was a Wesleyan Society at Blaydon. Their first preaching place was at a house belonging to William Hawdon and a descendant Mr. Michael Hawdon had a stone from the house with the inscription “W.H.M.” ( William & Mary Hawdon) and the date 1737. This house at 11 Bridge Street, High Blaydon comprised of a kitchen and a room above, the upper room was entered  from the kitchen via a ladder and a trapdoor and when the congregation was too large for the kitchen so the upper room was also used and the preacher stood on a stool, which was placed immediately under the trapdoor and the preacher stood on the stool with his head through the trapdoor and preached to both rooms at once. Then the congregation moved to a more commodious room in the ‘Horsecrofts’ in which they worshipped until 1856 when they took possession of a new chapel in Wesley Place. After conducting services here for nearly forty years they built a new chapel on the north side of Shibdon Road which opened in 1893  to seat 400 and at a cost of £2,600.00. Built
in the early English style it served as both school and chapel.

This church was known as Blaydon Wesleyan Methodist until 1937 when it was renamed St. John’s. In 1944 the Methodist Societies at St. John’s, Albert Street ( Primitive Methodist, Shibdon Rd.) and Lucy Street amalgamated. The Lucy Street premises were retained for worship, while St.John’s was kept as a Sunday School and for social purposes. The room had a stage and many Blaydon children of that time remember singing or reciting on the stage at Methodist Anniversaries.

Sadly the building burnt down in 1967 and  a Youth Club was built on the site next to the former Blaydon Council Offices, but this too has now been demolished and the site is now covered by the access road to the lower car park of Blaydon Shopping Precinct. 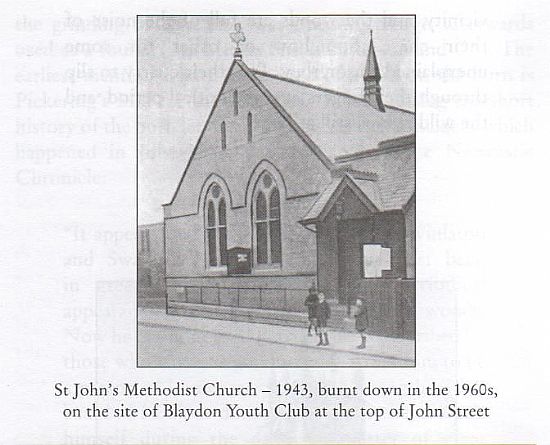 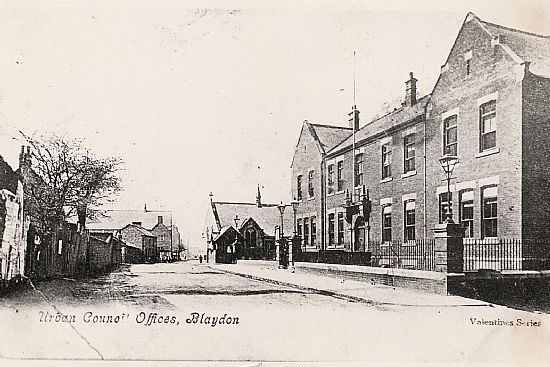