At Blaydon Haughs there were two chapels: one was a little tin hut, an Anglican Mission, on Patterson Street; the other - The Primitive Methodist Chapel - was nearer the river as can be seen on the map. Unfortunately we have no picture of this chapel.

Primitive Methodism had grown throughout the 1800s and in Winlaton the work of William and Mary Surtees led to the formation of a local society in the early 1820s. From there the movement grew in strength in the Blaydon area leading to PM chapels in all the local villages. William Paxton, a tradesman of prominence in the locality, devoted much time and attention to Blaydon Haughs, establishing a Sunday School, then having preaching services, and eventually, largely through his generosity, a chapel was built there, in 1881. It could seat 150 (possibly 200 according to local historian Bourne).

There were other figures involved the founding and success of this church. Two of the most significant were Mr & Mrs John Gaddes who both dedicated their long lives to it. There was a wall-plaque dedicated to Mrs Gaddes in 1929 in appreciation of 50 years service and John Gaddes and his wife were given a Diploma of Honour dated 1916 and a brass plaque to his memory after he died in 1919, the year of their Golden Wedding. There was also a Golden Wedding acknowledgement showing the great esteem and affection in which they were held by all the church members, and no doubt the other Spikers who would all know them very well.

At the end of the first world war the members of the congregation were each presented with a commemorative mug. Wilfie Charlton recalls that the chapel held a 'women's circle' social meeting every Monday afternoon. This would be 1920s/1930s. His mother Annie Charlton (nee Reay), Ada Dixon, Elsie Chapman and several other ladies went regularly. Wilf and his sister Lily, although by then residing in Blaydon, went to the Sunday School at Blaydon Haughs PM Chapel. At that time (1920s/30s) the teacher was Matthew (Matt) Purvis, a lay preacher who
was a miner from the Crookhill or Hedgefield area. Matt was a quiet man, a gentleman much loved within the church and community. After their religious lessons the Blaydon contingent, children and adults, regularly in summer walked down the short path to the river and east, along to the old Scotswood Bridge then back up Chain Bridge Road into Blaydon. Sadly the chapel closed in the early 1950s and was then used for a while as a commercial storage facility (possibly by Smith Patterson) before eventually being demolished.

Thanks to Richard Jennings of Bede Circuit, Newcastle upon Tyne District Methodist Archivist and Roly Veitch ( a full history of Blaydon Haughs ( The Spike) and the chapel, with many photographs, can be found on Roly’s Blaydon  website - www.rolyveitch.20m.com 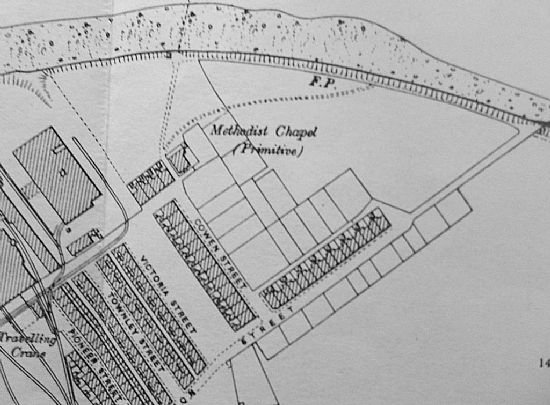