The government didn’t provide education and it was left to the churches to provide what they could. The Education Act of 1871 was passed ensure all children had the opportunity of elementary education, although Blaydon didn’t have its first school board until 1875 nor its first board school until 1891.  Please note we do have other school pictures, please email us if you would like copies

In the 19c a building in Bridge Street near the New Inn was used as a chapel of ease and as a school, known as ‘Hardy’s School’. Following the building of St. Cuthbert’s Church in 1844 a school was opened in Blaydon in St. Cuthbert’s Place, where the present shopping centre is now. As the population of Blaydon continued to expand more schools opened and this building in due course closed. 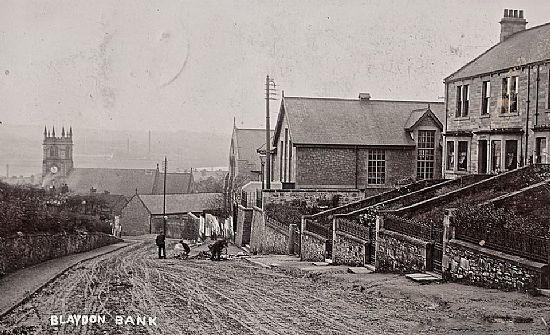 Father Wrennell of the RC  church at Stella was instrumental in opening a catholic school in Blaydon at the bottom of Blaydon
Bank in 1870-1 which provided education for 250 RC children and   Father Wrennell was a member of the 1875 school board
As the population of Blaydon expanded a larger school was needed and St. Joseph’s school on Blaydon Bank opened in 1898 with old school building eventually becoming the church hall. The old school closed some 30 years ago and was partially rebuilt and converted to
apartments. The new St. Joseph’s primary school being sited next to St. Thomas moor senior school.

This school opened in 1891 as Blaydon Board School, Boys Department. Following the transfer of responsibility for schools from School Boards to Local Education Authorities in 1904 it became a Council School. In 1909 Blaydon schools were reorganised when new Junior
schools were opened to accommodate children aged 7-11. This school then became Blaydon East Council Senior Boys. In 1929 Blaydon East Senior Boys and Senior Girls merged to form Blaydon Council Intermediate.  In the 1930s, pupils, under the leadership of English teacher Mr Elliott and art teacher Mr Boyce, gradually developed a technique for producing hardback books. Their productions were highly respected and favourably compared to other successful private printing presses of the time. In one volume produced by the school in 1935, entitled "Songs of Enchantment", the pupils were successful in convincing the famous poet Walter de la Mare to write a foreword in which he praised their enterprise and efforts. Following the 1944 Education Act the school's name was changed again, to Blaydon East County Secondary Modern. In 1967 the school merged with Winlaton County Secondary Modern Mixed to form a first stage comprehensive school, and Winlaton County Secondary closed. The change to fully comprehensive education was completed in 1971 with the merger of Blaydon East with Blaydon Grammar School to form Blaydon Comprehensive. Blaydon East ceased to exist as a separate school but the new Comprehensive continued to operate on 2 sites, and the Blaydon East site became known as the Bank Department. Building later demolished to make way for housing

Designed in Arts and Crafts Baroque style this building is of national importance and is Grade II listed. Built 1907-09 by J Morsen.in snecked sandstone with ashlar dressings.  In 1909 Blaydon schools were reorganised when new Junior schools were opened to accommodate children aged 7-11, this became known as Blaydon West School and the board school became the senior school
known as Blaydon East School

Founded 12 October 1912 as a Secondary School Became a Grammar School in 1945 following the 1944 Education Act Became Comprehensive in 1967 Merged to become an annex of Hookergate in 1998 Closed 2000 building demolished, swimming pool and
NHS Primary care centre now on this site. The first headteacher was Mr Wilson 1912-1934 who was appointed Headmaster of the newly
erected Blaydon Secondary School as from 1st January, 1912, taking over the staff and pupils of the Blaydon Pupil Teachers’ Centre in addition to the younger entrants to form 1.  Followed by Mr. Williams 1934-50  Taught  History and Latin at the school from 1914 becoming Head in 1934. The dining hall and sports extensions to the school were built during his term. Then Mr Lockett 1951-66

Winlaton was governed by the paternalistic system of the main employer, Ambrose Crowley, for 250 years and he provided schooling for the children of his workers. This was most unusual for working class children to be able to receive an education in the 18c.Each worker subscribed to a fund for a schoolmaster.The school was at the site of the original St. Anne’s Chapel ( the site now houses Thornbury Apartments ). But because this was before compulsory schooling it gave rise to Winlaton being known as Knowledge Hill and there is a street in the village with that title. The teacher also had to comply to Crowley’s rules, he had to be at school for all the appointed hours and not dismiss the children for his own pursuits. The children had to be taught to show respect to their superiors,the teacher had to set them a good example. This was long before compulsory education which didn’t become law until 1870. After Crowley’s withdrew from Winlaton a new national school was then built on this site in 1816 which remained in use until a new church school was built in 1902 on glebe land. The building, which is now St. Paul’s Church Hall, was opened by Francis Priestman of Priestman’s Collieries as they had contributed
to the cost.

THE Winlaton School Board was formed in 1875 and they bought land from Lord Scrafton to build West Lane school which opened in 1877l. The old church school became an annexe to West Lane. the adjoining school house was built to house the headmaster.